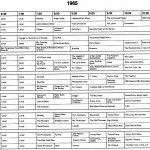 It’s that exciting time of the year when the new television shows launch in September!  For geriatrics like me who remember the old print version of TV Guide, you’ll recall we looked forward to late August when their big Season Preview Issue came out.

The Season Preview carried detailed descriptions of each new series on the networks, and most of the series used to run at least half a season before they were cancelled.  Yes, it was a thick magazine (these were made of paper, kids), which celebrated the launch of all the new comedy, drama and variety shows…and also had the easiest crossword puzzle anywhere.

But….with a key Presidential election looming in November, most of the content of these series have been “adjusted” to fit what Washington thinks are burning issues for the “Amurrican” people. So, while you’re Biden your time, holed up in your Baracks, eating Romney soup and looking up at ORyan’s belt…go ahead and peruse some highlights from upcoming series this fall on some of the major networks:

The Amazing Race – Representatives from different parties in every race vying for the same office while miraculously agreeing on platform positions; thus entirely confusing the populace

American Dad and Family Guy – These titles fit both of this fall’s presidential candidates and ironically, so does the phrase “cartoon character”

Dancing with the Stars – Obama renames the Lincoln bedroom the Clooney bedroom, and has a gaggle of Hollywood actors over twice a week to cut the rug (but not the taxes)

The Big Bang Theory – The right-wing “thinking” behind owning an AK-47 to hunt bunny rabbits in your backyard – rat-a-tat, rat-a-tat, Bazinga!

Hawaii Five-O – Despite high prices and a weekly dose of crime from drug lords to mobsters, everybody on the mainland who watches this show still wants to escape and live there year-round

Private Practice – Brought to you by Kleenex; it’s an angst-ridden group doctor’s office after Medicare finally vanishes. But, let’s remember that these characters didn’t build this business alone; it was the infrastructure others created which helped them to be successful in the first place

Person of Interest – It’s how voters selected candidates years ago when the political elections were focused on the best choice for office. Based on current political candidates, it’s soon to be renamed – Lesser of Two Evils

The Vampire Diaries – Shortly after the 2012 elections, no matter who wins, all of Washington’s elected officials put the bite on the American people.

….which leads to remakes and re-naming of the following shows – Two and a Half Men in a Tiny Studio Apartment; Scandal; 2 Really Broke Girls; Survivor; The Last Resort; Up All Night; America’s Finding it Hard to Have a Funny Home Video; and the season-ending – The Good Wife Took off with the UPS guy.

Well, since it sounds like we’re all in Jeopardy this fall – toss out the Season Preview, tell Alex Trebek you’ll take “Winning Lottery Numbers” for $500…and head off to Hawaii Five-O!