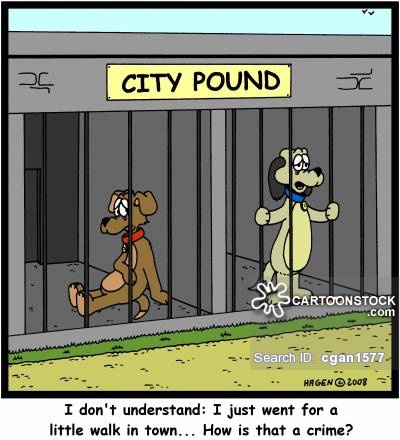 ‘I don’t understand: I just went for a little walk in town… How is that a crime?’

Quite the week here at WallyWorld.

We experienced a series of events which significantly changed the face of how we get along, treat each other with respect and build or tear down trust.

I’m not speaking of the tragedies in Paris last week; although my puppy heart goes out to the Parisians and especially Diesel the hero dog…a sad and heroic story indeed.

No, I’m speaking of the painful mistrust I’ve created in my own home by running away one morning last week.

I’ve enjoyed my four-year sentence here at the minimum security facility known as Wally’s house. Two squares a day – although they did cut back my wet food a few months ago; apparently my mid-section was such that I looked like a Hindenburg, covered in brown fur that is…Ironic as there’s also another Hindenburg in the house who shall remain nameless, but let’s say he can’t grow any fur on his head these days. Maybe we should drop his wet food too!

Otherwise, the penitentiary, err, house, is comfortable and I’m allowed to sleep on the couch during TV time…so not too bad overall. We do have scheduled exercise a couple of times a day in the yard. Those outings are monitored by Wally who is the warden, and essentially it’s a shackle-free event. I’m allowed to roam the yard at my leisure…checking in on the free deer and squirrel poop buffet (Golden Corral, eat your heart out), and generally keeping a tight perimeter by startling the same deer and squirrels.

Warden Wally, bless his heart, is laissez-faire as a security guard. That means he’s out there with me, but let’s me roam free as long as I don’t cross the borders.  When I get near an area he had designated as border, he yells out – “Hudson, come here…” and of course I ignore him, much the way every child in our town ignores the word “no.” To be fair though, many haven’t heard the word no…ever.

Must say, the Warden’s yelling irks me a bit – not sure what the problem is, I’m four years old and that’s really 28 right? So, I’m pretty mature…and anyway, what are the chances I’ll make a break for the border?

Well, I’d say the chances were pretty good this week!

One morning a couple of days ago, the Warden had finished getting dressed and let me out for my post breakfast constitutional in the yard. Unleashed of course. You see, all felons know it pays to build a high degree of trust with the guards, so when break out day comes, they’re completely taken off guard….like Warden Wally.

I leisurely headed to the stonewall area near a barn on our property. Gingerly stepping behind the barn out of eyesight, I jumped over the stone wall and into the neighbor’s yard.

Minutes later I could tell that the Warden figured out something was amiss…he didn’t hear the telltale rustle of the leaves signaling I’m in the area and began calling my name. Now it was 7am, so he couldn’t really scream loudly, but I could sense his displeasure even in the muted tones of his voice.

So, I did what any well-respected dog would do…trotted off the other way!

However, the Warden knows me all too well…he went around the neighbor’s house and cut me off on my bolt for freedom. He really shouldn’t have caught me, but one of the neighbors was packing his truck for work and I decided he looked like an easy mark for a head scratch…and he was.

Anyway, by then, the Warden was finally on me and the neighbor just laughed. The Warden was amazingly calm since I didn’t listen, kept on going and, yes, it was 7 in the morning so he wasn’t going to scream. He got me back safely to the penitentiary through the woods with a small bit of frustration. I didn’t make eye contact, always a good plan when you’ve messed up.

All’s well that ends well, eh? Well, life has changed here a bit though – the Warden no longer lets me run free in the yard – the shackles have returned, well I call them shackles… you would probably call it a leash. He’s held fast to this new rule of me not going free and I think he’s going to stick with it…well until the snow arrives! I suppose it’s the price I need to pay for not listening. The punishment could have been worse.

There was one scary moment yesterday though – Wally said “hey jump in the car we are going for a ride…” – well I’m a sucker for that every time. Thinking we were going to pick up his wife (my couch buddy); I was in for a surprise.  He drives for quite a bit and then we get out and go into this building with cement floors, and there are other dogs around and people too. Oh no, I’ve really screwed the pooch – well not literally, you know what I mean, I’m in for it – and here comes the real punishment. He speaks to one of the people in uniform and then takes my collar with him – OK, now I’m convinced that’s for Wally’s memorabilia box, and he’s he sending me off to the glue factory.

Well, obviously it wasn’t the glue factory because I’m writing this…no, it was in fact Pet Smart and he had taken me there for a grooming appointment. So now I smell really good, but the Warden is pretty clear that I’m still on a leash…oh well.

That’s my story, and I know you other dogs out there being kept in the same minimum security penitentiary are jealous right now. I mean how many of you can say your punishment the last time you broke out was a spa day and a Pedi? Hmmmmm?