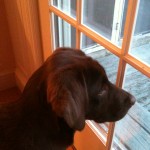 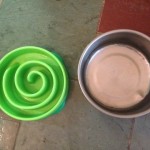 Finally…fall is upon us! The leaves are falling, the squirrels are throwing nuts at me from the trees and Woody, our woodchuck, is almost reachable as he’s moving slowly after adding a few pounds this summer. The best news is that we can put our bathing suits away for a while and not be so self-conscious. My brown fur suit has been the hit of the pool and beach crowd by the way; just wish I could figure a way to get it off!

Weight gain/loss is a big subject of conversation in our house over the last few months. You see, we have a wedding coming up soon with the big tall blondish guy who I think used to live here in the room that looks like it was featured in Hoarders Magazine, and my buddy Peyton’s mom. Weddings mean everybody in the house needs to drop some weight so they can look their best.

For my master Wally, weight loss will mean that he’s able to button the collar of his dress shirt, ‘cause that guy has put on a few in the last couple of months. He’s not even close to his goals for pre-wedding weight purge. He said he’s been retaining water, more like he’s retaining bourbon!

As a chocolate lab who dines both indoors (Pet Smart’s finest) and outdoors (at the secret buffet of grass and deer droppings), I know a thing or two about weight gain. Like Wally, I too put on a few pounds last fall. Part of it was a diet of both soft food and meal, but we (everybody but me) think that it’s because I have a nasty habit of wolfing my food quickly at every meal. Who me? Nah!

Didn’t believe the noise from these humans until the regular visit to the vet caused him to comment, “Ah, Hudson needs to drop a couple of pounds.” It was all I could do to not bite him in the leg. Heeding the recommendation, Wally yanked the soft food from my diet thinking that would help. He probably wanted it for himself, because I haven’t seen the cans that were left over in a while, and there is a box of Triscuits missing. Hope he enjoyed that nice hors d’oeuvre!

Anyway, my issue was still that I would wolf the food down each night, literally taking seconds, not minutes to finish. Wally said it was similar to he and his brother eating when they were growing up – as the first person to finish got the seconds.

Well, Peyton’s mom came up with a great solution in the form of a Christmas present last year – the Slo-Bowl. I asked Santa for a big rawhide, but nope, she gave me this bowl which will help me eat more slowly…whoopee! What’s coming this year, a scale?

As you can see in the picture, the concept is that the meal falls into the little crevices and that makes it more difficult to eat, thus slowing down the process. Taking more time eating is supposed to help digestion, and therefore help me lose weight. Have to say after eight months of using this bowl, it seems to work pretty well. I’ve dropped several pounds, don’t miss the soft food, but I’m getting better at eating fast again, so they may need to come up with a more challenging bowl. I’ll still ask for a rawhide this Christmas though.

Well, have to say that unlike others in my house previously mentioned in this post, I’m in fine shape for the wedding in a couple of weeks – but haven’t seen an invite in the mail as yet…odd, I’m usually well-behaved in crowds!

Since the bowl worked on me, here’s an idea – maybe we can get a Slo-Bowl for Wally…or better yet, a Slo-Bourbon-Tumbler!