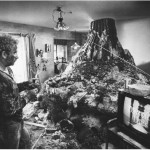 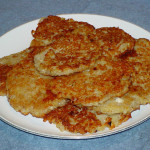 When one gets older the concept of cooking comes much more easily. Like life, much of developing one’s cooking ability comes with a bit of “in the field” experience and a great degree of common sense. Common sense is a learned trait though, as this story will confirm…

I went to a small college in Western Pennsylvania. Quite a venture from a boy raised in Westchester County…but the school had a couple of things going for it: it was small, and they accepted me. The other thing the school had going for it would be a young lady from Pittsburgh I met who would eventually become my wife years later. I’ll admit that part of my girlfriend’s early appeal was a mother who was (and is) a fabulous cook. I was a collegiate swimmer, and while no Michael Phelps in the pool – I certainly put away the same amount of calories each day…so this girl with a cook was a value add as far as I was concerned. Oh, and family platters of food were a regular thing at this establishment!

Now, I came from a home where we cooked basic things…chicken, steak, well-done pot roast and some great things which my father tended to cook, like omelets and potato pancakes. So, I was exposed to very little cooking (except watching the Galloping Gourmet with my parents) and in my college years, had even less common sense.

Oh, and I’m from New York, so of course I know it all.

There comes a weekend when we are at my girlfriend’s house in Pittsburgh and her mother is cooking dinner. I’m pretty much like my current dog Hudson, where drool is coming out of my mouth at the prospect of multiple helpings. “Mom” turns around in the kitchen to say that she had some leftover mashed potatoes that she didn’t really know what to do with. Here’s where the 19-year-old common sense comes in as I say – “Hey we can make potato pancakes…I’ve seen my father make them all the time, its like an old family recipe – they’re easy.”

I shift into Galloping Gourmet mode, with an Iron City Light instead of a glass of wine. I ask my girlfriend’s mom to get me eggs, flour, butter, some mixing bowls and a frying pan. What I didn’t actually realize that cooked potatoes don’t form well…so the result was a kitchen covered in flour and potato “pancakes” which at best looked like one pile of thick scrambled eggs. Thankfully, parts of the potatoes crisped (burned) so we could get them out of the pan.

My girlfriend’s family served them at dinner anyway; but not without each and everyone taking the opportunity to say at some point during the meal after a bite of my “potato pan-mistake” –