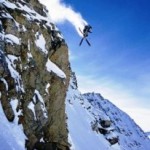 Although it’s a bit late in the season for a post on skiing; the President’s Day holiday (a favorite ski getaway weekend) reminded me of my first…and only…time skiing.

Those that know me well are aware that I only participate sports which need limited athletic equipment; for instance – a swimsuit, goggles and a cocktail shaker (I’m talking about two different sports of course). Winter sports was never my thing, but my father was an avid skier in his day, so one would assume I possessed a decent gene pool for the sport. But because he was older, as a family we never had an opportunity to hit the slopes.  Also, as I was usually swimming in the winters, skiing was never on my radar screen.

Well, one day several years ago, that would change.

Believe it was the late nineties, as I was in my early forties at the time. With a three-day weekend in process and a Monday off; my friend Mike called to suggest we take our two oldest boys skiing on that Monday. I told him that while my son had skied with friends before, I hadn’t been to a ski slope – ever…he said, “C’mon, give it a try, it would be fun and there are beginner slopes.” So, I reluctantly agreed.

Piling the boys into the SUV early in the morning, we headed up to Butternut Resort just over the Connecticut border in Massachusetts. Everybody was buzzing with excitement in the car, while I spent the ride asking myself why I would decide to do this in my 40’s when broken bones don’t mend quickly…and trying to recall what kind of coverage I had on my life insurance – hoping I’d remembered to pay the premium.

Arriving at Butternut, it was a nice sunny day out and we made sure the boys were set-up first. They were quickly outfitted with skis, helmets; everything they needed, and we put them into ski class saying we would catch up to ski with them later.

Then it was my turn. Boots, helmet, skis, poles, etc…all fitted for me. Felt like I was headed into battle; little did I know.  Mike took me out the back door of the ski hut and gave me a quick lesson: how to get into skis, how to release the bindings, how to walk sideways in skis, and finally helped me understand the value of the snowplow.  This “lesson” might have taken all of 15 minutes, then it was off to the Bunny Hill.

For those who don’t ski, the Bunny Hill is where novices, young children and chickens (the human kind) choose to ski.  Not sure why the hill is named “Bunny,” as one usually thinks of soft, kind, furry animals that wouldn’t even think of harming you. This hill was really a precursor to what I can only describe as Velociraptor Hill, something that looked harmless, but could remove your head. Well, we had a couple of trips down the Bunny Hill and then Mike said “Not a bad start, let’s go to the beginner hill.”

We head over to the T-Bar which will take us up to the top of the beginner slope, and right then I remembered one of the main reasons I don’t ski – I’m deathly afraid of heights! I share this detail with Mike just as our asses are planted on the bar, and he says “In that case, don’t look down.” Ah, gulp.  I try my best to stare upward the whole way, occasionally peeking down and envisioning that I’m going to fall off the bar into the ravine like a James Bond villain in Her Majesty’s Secret Service.

Once arriving at the top, my first experience is one that I’ve seen in several of ski-comedy movies. Real skiers smoothly exit the T-Bar and ski to one side (preferably the green colored side, not the black double diamond). However, I smoothly land right on my butt, skis in the air, trying to scramble out-of-the-way before those coming in behind from the T-Bar run me over.  After this initial humiliation, and once back on my feet, I take my first run down Velociraptor hill.

Have to say the first trip down a ski slope is simultaneously exhilarating and horrifying. Let’s face it, it’s a beginner slope – so it is relatively wide open with exception of a tree stump situated in the middle of the slope, wrapped with an old tire. Snowplowing my way down slowly side-to-side, soon it’s clear that I’m really not in control of my destiny. This was confirmed as invariably veered toward the stump and of course, ran directly into it.  After this second humiliation and back on my feet, I finished my first run and lined up with Mike to go up again.  Will say that Mike was patient as hell since he knew how to ski and I didn’t…he waited most times mid-slope for me to show up…I’m guessing he was worried that he’d have to call my wife to say I’m wrapped around a tree, or another skier.

The rest of the morning was pretty good. Several trips down the same slope, falling down a few times. I got used to the heights on the T-Bar, and only skied into the T-Bar line at the bottom of the hill one time running over a couple of people – just like in the movies!  The boys joined us late morning…also an embarrassing moment as we were supposed to ski “together” and my son just said “Bye Dad,” and off he went flying down the hill at high speed; no ski poles.  Ah well, at least the remainder of the day was, thankfully, uneventful.

Thought it might be helpful to share some quick ski tips for first timers over 40 years old:

Clothing – If you’re a first time skier, you of course don’t have any ski clothing. Realize you will get quite warm even in the coldest weather, so re-think wearing that overstuffed down coat. It’s not waterproof anyway and becomes like a damp roll of paper towels and is really heavy when wet – it does however, provide good protection when you hit the stump in the middle, and you will…repeatedly. Additionally, no need for a sweater underneath…I wore a long sweater in which the bottom fell below my coat. After several falls in the snow, it looked like I was wearing a WWF Championship Belt made of solid ice!  Guess you could say I was Stone Cold.

Lunch – While nourishment is always good, I was so stressed out that I thought having a couple of Bloody Mary’s at lunch was a good idea and would relax me. Wrong.  Basically, when my body realized I was sitting down it seized up like an old rusted out car.  The alcohol just acted like formaldehyde in a dead body, locking up my joints, and like the car, I was unable to get myself started again.

Aspirin – Yes, aspirin is your friend after your first time skiing.  I was sore for days after the trip.

Caller ID – you’ll need this when you see your friend calling you again to go skiing, and you can avoid picking up the phone!

Thankfully, my father wasn’t alive to see my skiing antics that day and needless to say I won’t appear again on a ski slope, which I think other skiers will appreciate.

Since I already have the equipment, I’ve decided to stick with my favorite sport  which allows me to use the cocktail shaker…and crosses all seasons.

My suggestion to everybody is to skip the slopes, and have a great Spring!